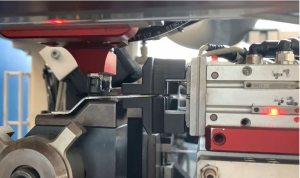 In 1997 the production of B-Cut saw blades for the oscillating multifunctional machines began under the name maRoc. Until the name change at the end of 2011, the E-Cut saw blades were produced there exclusively for a machine manufacturer. Since then, CORAM TOOLS GMBH has been on the market with its current trademark.

Behind the CORAM TOOLS GMBH brand is the inventor and managing director Marco Steiger.
The oscillating saw blades can be used to make very thin, filigree cuts, for example for window frames or doors. The tools have different holders that vary for the respective machine manufacturer, hardness (I, B, H), areas of application (wood, metal, PVC or combinations). CORAM TOOLS produces 66 different saw blades. The challenge here is to make production as productive as possible despite the high diversity.. 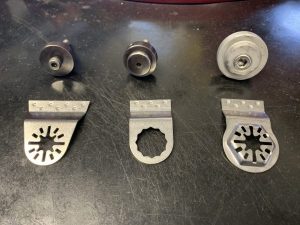 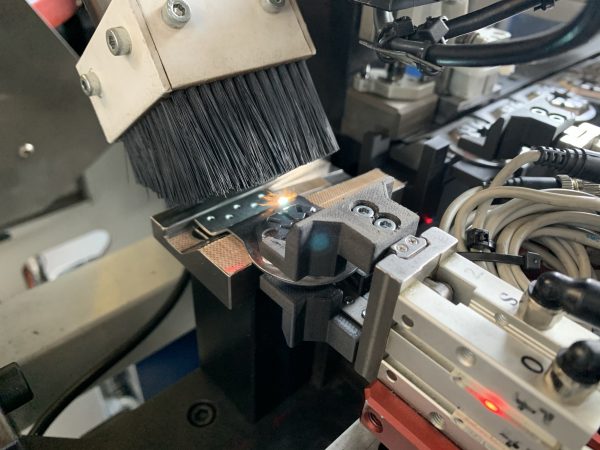 Quick changeover during retrofitting-Not all variants can run in one production line at the
same time, which is why the line has to be retrofitted again and again. How can you simplify that?

CORAM TOOLS made its first attempt in the field of high-strength, fiber-reinforced 3D printed parts on a gripper. This implementation made it possible to quickly manufacture individual and lightweight grippers.

If you go through the production at CORAM TOOLS, you will notice that not only one part was produced with the 3D printer, but that various small aids are used everywhere. The simplest things were implemented; From the collecting container to the mounting bracket, production equipment, and production line optimizations have been carried out, which is reflected in an increase in speed and a reduction in downtimes..

The example on the left shows the laser marking step. For this purpose, the recordings are held with optimally designed 3D printed grippers during the labeling. Wherever a laser is used, there is heat. The Onyx grippers have a heat resistance of 145 ° C – and even much more when used for a short period of time.

All saw blades are labeled, sometimes also individually with the customer’s logo. Incorrectly labeled parts are not simply thrown away but are put into a bath with liquid paint remover. The bracket for this is printed with onyx. Despite the very aggressive agent, Onyx easily withstands the challenges!

Originally, the scrap was thrown from the machine into a box that stood on the floor. Sometimes more, sometimes less successful. But Marco Steiger had a better idea: He designed a collecting container that could be mounted directly on the machine. So that it doesn’t break off and the parts fall back on, he reinforced the 3D printed containers with continuous fibers. So everything stays where it belongs.
The collecting bins have been painted red for better visibility.

So far, the rest of the process is still the same: Each scrap part has a routing slip on which all of the relevant data can be found. A possible next step would be to build an RFID chip into the container so that the entire process can be digitally recorded and categorized.

There are many other examples of how CORAM TOOLS uses the 3D printer. If there is free capacity on Mark Two, CORAM TOOLS also offers printing services.

3D printing is successfully used in a wide variety of production halls. Additive manufacturing is not a technology of the future.

The future is now! 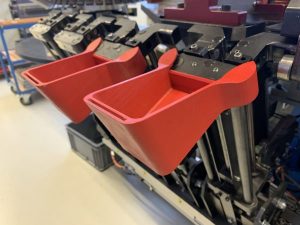 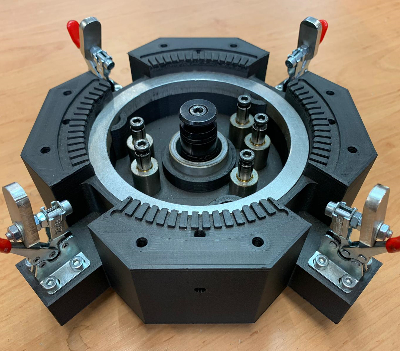