Since its inception, Corin Group has led the way in orthopaedic innovation — providing a faster, positive and more assured return to quality of life for people all over the world. Today, as a dynamic, growing, global business, Corin Group’s approach is revolutionising orthopaedics.
Their unique range of clinically proven hip, knee, ankle and shoulder solutions and world-leading technologies enable patients, surgeons and healthcare providers to connect more closely than ever.

Seamus Harrison of Mark3D UK spoke to Matt Smith, New Technologies and Process Engineer at Corin Group, in a “round table chat” about the integration of 3D printing at Corin Group.

#1 Who are Corin Group and what do they do?

#2 Why did you first start looking at additive manufacturing?

#3 What was the initial application you had for the printers?

#4 Why did you ultimately choose Markforged?

#5 How did you justify the initial printer purchase?

#6 What was your first print on the printer?

#8 How has additive made you think differently?

#9 What has been your favourite application?

#10 What materials are you printing with?

#11 How many printers do you have?

#12 Describe your relationship with Mark3D

Read all about the case study

The human body is all different shapes and sizes so for companies who specialise in making implants streamlining the process for handling variants is important.

Being involved in implementing new technology and creating new processes at the same time is an exciting role for any engineer. Ask Matt Smith of Corin Group, who is well underway with his additive manufacturing programme. Matt began his project in early 2020 with a printer justification based on several new product introductions. Matt and the team set about the task of introducing a new ‘stem’ and ‘femur’ to the product range and decided to see what new technology was available to help them do it in a timely manner. Each time a new product is introduced to manufacturing there are a large number of associated fixtures that come with it. Being able to make these in house was a clear benefit and offered some very reasonable cost savings, so it was the obvious place to start.

“We decided that we needed to look at additive as a means of helping us be more agile when introducing new products. We believed there were many areas where we’d benefit, however as we progressed with the project, and more colleagues got involved, we began to realise the huge potential we had” says Matt. As the project was getting underway the world fell victim to the Covid 19 pandemic and almost overnight facilities closed, including many of the supply chain at Corin Group.

Matt and the team were faced with the almost impossible task of ensuring their new project was still delivered on time, whilst having to work with no raw materials, no sub-contract manufacturing and limited internal resource. As they sat and mused over the creation of all the machining and inspection fixtures required, for the 48 variants of their new stem, and 24 variants of femur they quickly identified a new challenge, their raw material deliveries of forgings and castings would also be delayed. Without the raw material it would be impossible to even test the developed fixturing.

At each stage of the production process a stem forging or knee casting has operations performed on it, such as machining, polishing or marking with a laser, as well as a rigorous final inspection including several checks on sensitive equipment such as a coordinate measuring machine. Without the ability to have a finished component to trial at each step it would be impossible to complete the project, and the business quickly identified a bottleneck

The Engineering team began to think about the problem and collectively agreed on a way forwards that enabled them to continue to work on several key elements to the project, without ever seeing a metal component. Additive manufacturing gave the team tools they’d never had before.

”We simply printed replica finished parts, raw material forgings and castings in Onyx and began the whole engineering process from there”

“Initially we were approached by the inspection team who asked us for a print of the 48 varieties of a ‘machined’ stem component, so they could write the CMM programmes and design their fixtures, (for us to print). After that success word spread quickly and we realised that we could actually do this for many steps in the process. So, from the casting CAD model we printed a full size femur, in Onyx with a solid fill and used it to run a first off test machining programme – to prove out the toolpaths developed in our CAM. This part could also be passed on to the next person in the process for their engineering, and so on, until we’d finished. Even though we were aware the feeds and speeds would be different, machining the Onyx worked well, giving us good stability and part geometry to base the rest of the processes on” Matt and the team then looked in to other areas.

“My colleague began laser marking the Onyx parts with great success. Another colleague designed the fixturing and engineered a way to encompass all of the different stem sizes. So, we reduced the number of fixtures and they were able to write all the programmes too!” Matt and the team had compressed the whole engineering process by working on it concurrently. When the metal raw material eventually arrived many of the inspection and laser marking programs were ready to use from day one.

“When we first began our additive journey, we had a clearly identified project, but due to circumstances beyond our control we had to think out of the box to solve a supply chain problem, and the printers played a big part in it.”
– Matt Smith – New Technologies and Process Engineer, Corin Group

“The machining programmes for the CNC’s were created and tested on life size plastic models”.

Cutting parts with complex geometry involves writing some complicated machining programmes, and these programmes need testing before production can begin. Proving out toolpaths for 24 programmes is a timely activity and also means that other steps in the process can’t begin until they are signed off.

Machining programmes were written and tested in the background, using solid Onyx parts instead of castings. “Using Onyx was great” says Matt. “It gave us the confidence that the tool paths were correct and as the parts are made out of plastic if we did get something wrong, we wouldn’t damage the tooling or machine – the plastic parts would have given first. Any errors on CNC machining programmes can have expensive, serious repercussions to a business, that’s why we need to spot them in plenty of time”.

Machining fixture design and creation was much simpler for Corin Group too. Developing tough machining fixtures with Carbon Fibre or Kevlar inside them was quick and easy. Sometimes changes would be simple like clearance for a tool and other times it was something more complex, like the location geometry where the part is held.

Before the 3D printers were onsite Corin Group had to machine the fixtures on their own production machines or send them out to a sub-contractor, where change wasn’t easy, and costs were high. “Our development of fixtures on the printers was much, much faster, and we have even identified uses where we can continue using the Onyx print as a production fixture.” says Matt. 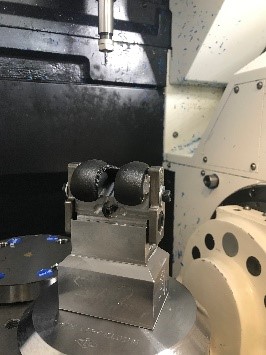 “One member of the team developed an interchangeable fixturing system so we could use it for any size of stem”.

Holding 48 variants of a stem for laser marking presents its problems, especially when you are learning how to use a new laser marking machine at the same time.

“In a strange kind of way using a new laser marking machine was a benefit” says Matt. “Because we had this new machine that could hold multiple parts for marking, we thought about it from a fresh perspective. The old method of one fixture per part simply wasn’t acceptable, so we needed to develop a completely different approach”.

Corin Group chose to make a single base fixture and developed a range of interchangeable cradles that could be swapped in and out. A member of the engineering team worked on the project with Matt and they both in turn took advice and got perspective from the machine operator. This collaboration would simply have not been possible if the work had been outsourced.

“It’s now possible to load a tray of 15 parts and laser mark them in one go, whereas before we were doing them one at a time and would have needed 48 different fixtures. Our new fixturing system means we can also mix and match part sizes too. It’s so simple to change a fixture that breaks down and set up can be done in a number of minutes.”

Once the fixture was completed Matt and the team left the operator to programme the range of sizes and work on getting the laser marking signed off as a project. The fixtures were so successful they plan to roll out the multi-part fixtures on Corin Groups’ other product range. 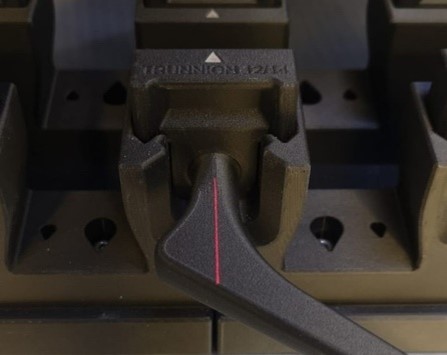 “All of our inspection programmes were written before we even saw a finished metal part”.

Being in the orthopaedics healthcare sector requires traceability, so ‘inspection’ covers a wide range of things for Corin Group. There’s initial inspection of cast or forged components, interim inspection of machined & polished faces and of course final inspection.

“We started with a simple ‘measuring guide’ gauge for each size of stem and we were really pleased with how the printers held the tolerances we needed to work with. The ability to simply slide a part in an Onyx fixture, printed with standard settings, is a real benefit. Before additive arrived at Corin Group we would have to get these machined externally which was really expensive and took a long time. After we did the engineering on the first one, we were happy enough to just change the CAD model and hit print with confidence it would meet specification.” Corin Group adopted the same approach for CMM and non-contact metrology programmes as they had used when they developed their CNC programmes, and they worked in parallel with the machining team. By printing the finished plastic part and giving it to the inspection team, the automated routines needed to run their CMM machines could be produced well in advance of seeing a metal product.

“The plastic parts were stable enough to allow us to complete out inspection process, which includes writing the programmes for the CMM’s. The surface finish of the printed Onyx didn’t present us any problems at all” continues Matt. “It’s been amazing how we’ve compressed our process by using a 3D printed models before the real ones arrive. Additive has certainly been beneficial to Corin Group in this area and we plan on adopting this as a standard development step moving forward.” 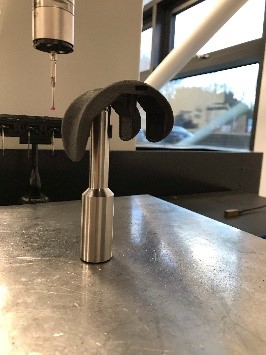