MARK3D at AU London – Trust us, ‘It’s not just another 3D printer’ 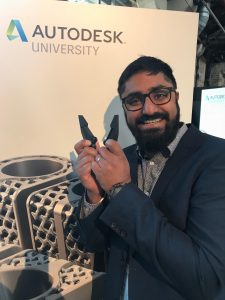 At Autodesk University London, we challenged delegates to see if they could break one of our 3D printed, carbon-fibre embedded Ducati brake levers.

We picked the strongest-looking engineers from the crowd and challenged them to bust the lever made from a Markforged 3D printer. Ian Weston from Markforged reseller MARK3D says, “We asked them to stamp on it, bend it, jump on it and all of them gave up. It is tough -up to a flexural strength of 470MPa tough!”

The reason delegates couldn’t break it – and believe us, they tried – is thanks to a new disruptive technology from Markforged that allows engineers to 3D print prototypes and end parts that are as strong as aluminium.

Ian explains, “Markforged 3D printers print in black onyx, which in itself is tough – but what is special here, is that these printers have a second print nozzle next to the print head, so you can print continuous 100 per cent carbon fibre as you print the onyx.

“The engineers loved that our Markforged printers could print stronger than anybody else. They were also very interested in our print quality, because the surface finish for onyx is superb.”

One delegate, Harvinder Saund, technical sales specialist for Fusion 360, said: “Every time I see a print from a Markforged printer, I’m highly impressed. I needed a part that would fit into a bike gear, so I could mount it easily. It needed to withstand some serious torque. MARK3D came to the rescue. I sent them a Fusion360 file and 24 hours later it was mounted and running.”

The ‘unbreakable’ Ducati brake lever was printed from Markforged’s X7 series, which also supports a full range of plastic and composite materials, including embedding Kevlar, which is great for impact resistance, or embedding Fibre Glass for parts requiring high temperature environments. The new Markforged Metal X series can print metal parts overnight and at a fraction of the cost of regular metal components.

Ian says, “The 3D printing market has really only touched the tip of the iceberg when it comes to AM applications. It’s been mainly used for printing toys, making visual checks and prototyping, but our solution means the technology can be adapted to make all the tough stuff engineers need.

“At MARK3D, we have a customer who had been paying £130 for a machined aluminium bracket. We printed it for him for £6 and it was just as strong. With Markforged printers, 3D printing is a viable option for low-volume production. As all the engineers at Autodesk University London discovered – it’s not just another 3D printer.”

Get the tough end parts you demand. For high strength, carbon fibre 3D printers from Markforged call the UK experts at MARK3D on 0800 193 3650.