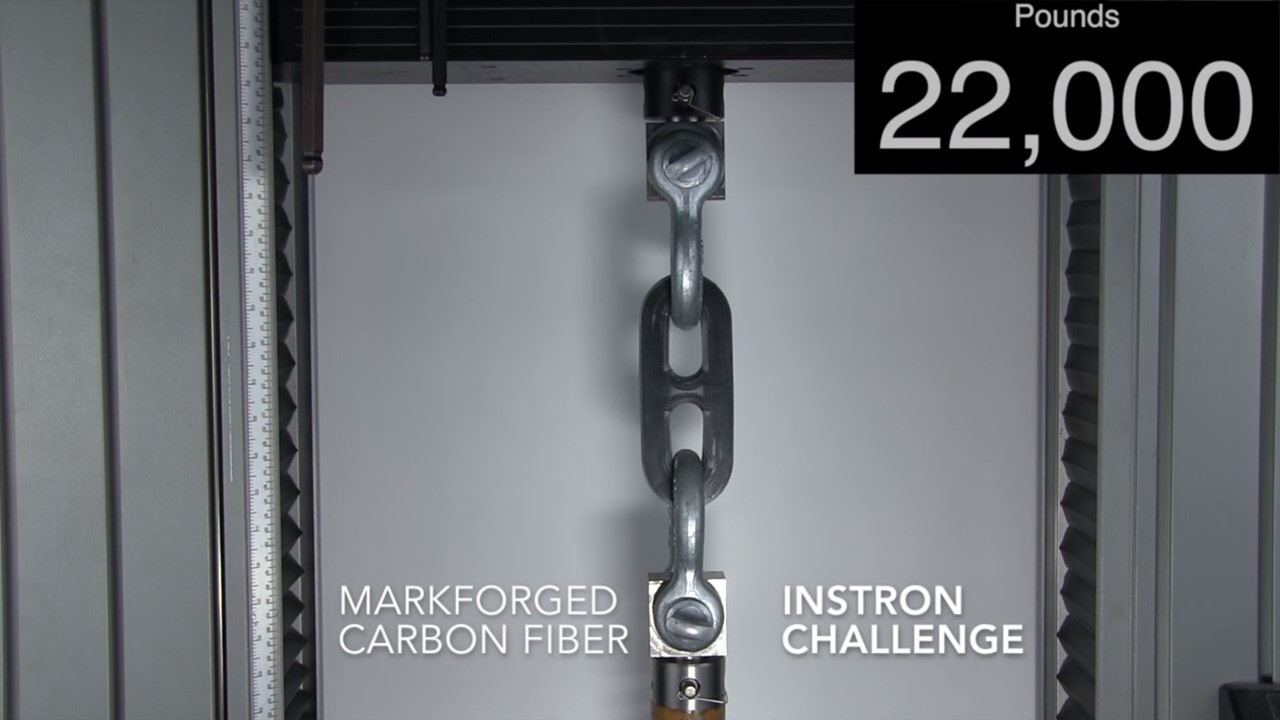 Do you want prototypes and end parts that are as strong as aluminium but don’t take weeks to fabricate? More and more companies are turning to a 3D printed continuous carbon fibre composite that can deliver industrial strength parts on the same day – at a fraction of the cost.

Greg Mark, founder of Markforged 3D printers, which developed the high strength materials explains, “We take plastic, reinforce it with carbon fibre and give you parts that are as strong as aluminium – and we’re not talking bad aluminium, but 6061-T6 aircraft grade aluminium.”

Olin College of Engineering in Massachusetts recently tested the material by 3D printing a chain link made out of nylon plastic reinforced with carbon. It found the chain was able to lift the equivalent of a 10 tonne cement lorry before breaking the strain at 22,000lbs of force.

According to Greg it is the disruptive technology for which manufacturing companies have been crying out. While 3D printing technology has been around for more than 30 years, he says customers have been forced to accept a trade off between strength, time and affordability. Many companies are compromising on strength and using parts made from conventional polymers, which are just not up to the job in a manufacturing environment.

“Customers need to print same day parts that optimise strength and affordability for their specific needs with ease,” he says.

One such customer was a car manufacturer in the USA, whose assembly line kept being hit by aluminium components constantly failing. “The aluminium tabs were the number one cause for assembly line down failure,” says Greg, “so an engineer used one of our desktop ‘toy’ printers to 3D print a tab out. Reinforced with carbon fibre meant that it was stronger than aluminium. He took the part home and beat it with a hammer to decide whether he could use it on his assembly line. He couldn’t break it, so he installed one tab on the carousel and ran it for two months. Soon, he was replacing the aluminium parts as they broke with 3D printed ones. He had never used composites before he had heard of carbon fibre and fibre glass, and now he had this little box on his desk that could design and print parts. To be honest, he didn’t care what was in the part – he just cared that the assembly line wouldn’t break down.”

The introduction of continuous carbon fibre technology means industrial strength printing is now financially attainable for every manufacturing business. Mechanical Engineering doesn’t need to be a slow process anymore, states Greg. “Rather than take a few hours to design something and then wait for a few weeks to get it back, 3D printing is there to reduce this cycle.”

Ian Weston, Managing Director of Mark3D UK, agrees with Greg’s sentiments. He adds: “Many of our customers are actively replacing expensive machined aluminium or brittle old-style 3D printed parts with items strong enough for permanent end-use. We’re delighted to be involved in this exciting market and spend a lot of time helping engineers realise that they can ‘print stronger’ than ever before.

“One example we’ve been working on recently is a mould tool for carbon fibre parts. The mould we printed survived 100ºC and 100 PSI for a number of hours in the autoclave. This effectively means that for a vast majority of the moulds, my customer can replace a machining process with a printing one, making a 10x saving in the long run.”

Find out more about high strength, carbon fibre 3D printers from Markforged. Call the UK experts at MARK3D on 0800 193 3650.